I got a terrifying call from my parents towards the end of fall semester. They had one simple question —where did you spend all that money? In typical fall semester fashion, I was an extremely stressed out student with a full course load and a bunch of other commitments. I had 12-hour-work days and barely any sleep. The only thing that got me through was copious amounts of coffee and donuts. At one point, the baristas at my local Dunkin knew my order and the time I would come by so they would have my coffee ready for me.

Now, obviously that much coffee isn’t the best for your health but it really isn’t good for your wallet. By the end of the semester I had spent well above the national average on coffee (something else I learned on the Boro app). But perhaps the worst part was that I didn’t even realize it had happened. None of my bank apps sent me an alert and I had no idea of how low my balance was. Part of this was my own fault for not taking the time out to look at my bank statements but I had no idea how out of control my spending had gotten.

I think most students find themselves in a similar situation at least once in their college life. ‘Going broke’ has a lot to do with not being able to budget. My biggest issue was that I had no way of understanding how I could maximize my monthly allowance and make the most out of it. I just started using MyBoro on the Boro app and it helped me out a lot. The app is simple, easy to use and helps you out every step of the way.

The most unique part of the app are the StackUp comparisons that helped shape my personal insight on my finances. The app measures your spending habits against the national and state average for a similar pool of students and tells you how you stack up in comparison to them. For example, when I first started using the app, it assessed my monthly spendings on groceries that month and told me that I was spending below the national average. However, it told me that my spending on subscriptions was slightly higher than the national average. I know now that there is room for improvement and that I should look into my subscriptions to check to see if I'm paying for something I might not need. The stats on the app help you benchmark your spendings so that you can optimize better and make smarter decisions about your money.

The budget tracking is completely automatic and I can set my goals depending on the categories I spend most in. Plus, the goal setting feature tells me what I spend on average so that I have a better idea of where to set the goal. It has been extremely helpful in ensuring that I do not end up overspending. The app keeps track of how much you spend in a particular category and how close you are to reaching your limit and ensures that you’re never caught off guard. Furthermore, you can create three separate goals at a time so you don’t end up compromising on your financial priorities. 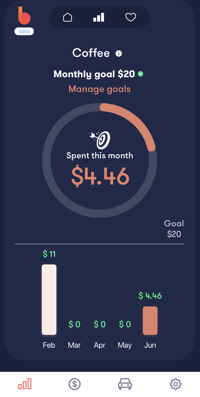 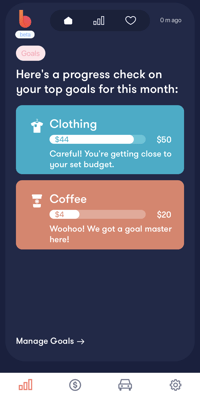 The spending analysis ties all of this together. It really helped me identify what my impulse purchases look like. Before trying out Boro I would sometimes convince myself into buying things that I didn’t need without actively understanding that that could be financially irresponsible. I had no way of holding myself accountable because I couldn’t see how it was impacting my budgeting goals. MyBoro made this so clear. I love how seamless the whole system is. Every function helps and makes the other features more useful.

After using the app for the last few weeks, I’m definitely more aware of how much I’m spending each week. It’s really helped me stay on top of my spending and if you’re a college student looking to do the same, download the Boro app now. It’s totally free to use and it’s a great tool to have right on your phone.

College + Finance typically don't mix. BoroU is all about changing that up. We're talking about how to set a going-out budget, how to get that dream internship, and all things college and money. Looking for more? Download the Boro app on the app store now.

Want all things college and finance right to your email?

Subscribe to the Boro newsletter and get college finance news and tips right to your inbox. We'll be right above that group project google doc thread and below that email from the University president.

Ready to become a respons...